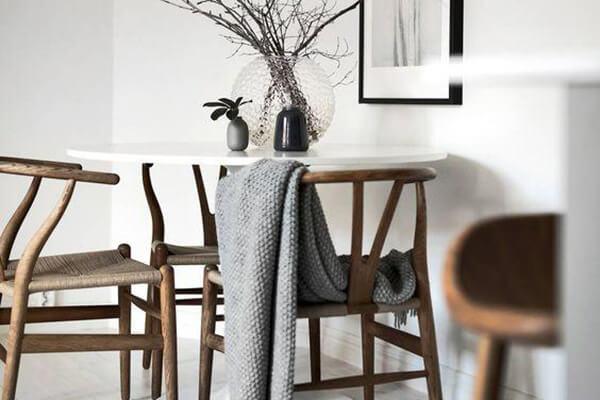 At the Copenhagen Cabinetmakers’ Guild exhibition in 1947, a young unknown Danish designer called Hans Wegner was attracting attention. His sleek forms inspired by the minimal designs of China’s Ming dynasty were fresh and radical for the time. He was approached by a furniture manufacturer who wanted to license his designs. That same manufacturer has not stopped producing the young Wegner’s designs from 1947 to this day.

The CH24, a.k.a. Wishbone Chair, turned out to be the most commercially successful of the more than 500 chairs that Wegner designed in his lifetime. Sometimes referred to as a supermodel chair, for the number of interior design magazine covers it has graced, no work on chairs would be complete without some mention of it.

Wegner was inspired by a portrait of a Danish merchant seated in a Ming-style chair. The Ming dynasty is heralded as the golden age of Chinese furniture design. Central to the craftsmen’s quest was a search for harmony through simple, yet precise and elegant designs that were inspired by nature itself.

The designs found their way to Europe via trade routes and Wegner’s first Ming-inspired design, a precursor to the Wishbone chair, was the China chair in 1943.

Wegner’s Wishbone design drew from a streamlined mix of curves and sharp angles seen in the wide-seated, high-backed thrones of the Ming emperors and he succeeded in merging this with typical Scandinavian elements. The name, Wishbone or Y Chair, comes from the slim flattened rib in its back that arches out to meet a top rail that nestles under your arm.

By using a “Y” support for the steam bent back and armrest and by giving the back legs a twist forward from the seat in order to bring them up to support the arms, he was able to give it a more sculptural form than its earlier incarnations. Furthermore, the lower, shorter arms allowed the chair to come closer to the table while giving the individual considerable freedom of movement.

Unlike many other designs which have experienced a rise and fall in popularity over the decades, Wegner’s Wishbone Chair has been in constant production for over 70 years.

The process behind its construction is intricate and still follows Wegner’s original design. The Wishbone Chair is made up of 14 separate components which requires more than 100 individual steps to make. Three weeks of chiselling, carving, sanding, shaping and curing, before the chair can even begin to be assembled.

Perhaps its most fascinating component is paper. More than 120 meters of paper cord is woven into each Wishbone Chair’s distinctive geometric seat design, which can last up to 50 years. This is all done by hand by skilled craftsmen – the seat alone is extremely time-consuming to make.

Although the chair didn’t initially gain attention in Denmark and was even referred to as “looking like garden furniture”, it was embraced in Germany and California with its warmer climate and within a few years the Danes celebrated it too.

Interestingly, Japan is the second-largest market for the Wishbone Chair and accounts for a quarter of its annual sales. It is so popular there that an entire book dedicated to the chair has been published in the Japanese language.

Wegner famously said that “The good chair is a task one is never completely done with”. In the 1990’s the height of the Wishbone Chair was increased by 2 cm to reflect the increase in height of the population. Japan still purchases it in its original height.

The Wishbone Chair is now considered a symbol of Danish modernism and is arguably Wegner’s most recognizable piece. Globally admired, its elegant, curved frame is often spotted in the best restaurants and hotels as well as in homes all over the world.